While We Wait for Science, the Government Should Put Their Thinking Caps On… 

How could the government go about adequately regulating fracking?

The regulatory environment will not be adequate unless it is properly geared for risk management that includes ‘legitimate, effective and sustainable protocols according to Brownswords Criteria. However, the regulatory space is a ‘shifting scene’. This means that throughout a technology’s development, out of the four criteria one or more may be the regulatory ‘hotspot’.

Considering that the UK has no shale gas industry to speak of as shale gas exploration was halted in 2019 after legal challenges, protests, and environmental and safety concerns, an analysis of regulatory effectiveness and regulatory connection would not be fitting in the context of the current progress of fracking operations.

Both criteria require analysis and presently, fracking has not reached an endpoint having only been explored in the UK prior to 2019. Therefore, we will look at how the government can begin directing its attention to achieving adequacy in relation to regulatory risk management and regulatory legitimacy.

Until 2019, onshore operations had only reached the exploration stage. Thus, scientific uncertainties as to fracking’s effects still linger. Fracking involves exerting fluids at high pressures into the rocks far below the surface to open up existing cracks so that gas can be released. The impacts on the environment are cross-cutting in nature and affect various elements of the environment.

Fracking, the UK government, and the multitude of risks to the environment

Considering the multitude of risks to the environment posed by fracking, it is all the more important that an ‘optimal mix’ of regulators is secured to ensure risk is monitored and minimised to an acceptable level. This requirement of an ‘optimal mix’ is fulfilled through a variety of regulatory bodies. An expansive regulatory framework geared towards risk management will reflect the sincerity of the UK government’s commitment to ensuring ‘safe fracking’.

Yet, the potential for a regulatory environment to achieve this does not secure adequacy. This is affirmed by Carolyn Abbot who quite rightly states, ‘it is the enforcement process which puts the flesh on the bones of any regulatory system’. Thus an assessment of how and whether the risk has in practice been reduced to an acceptable level is crucial if fracking is to be considered adequate.

Leonie Reins distinguishes between ‘policy-based evidence’ and ‘evidence-based policy’, two approaches to risk regulation that informs the conduct of regulators. Focusing on the latter, (with the knowledge that the US experience provides us with a sound understanding of the environmental impacts of fracking), evidence-based policy assumes that science underlies policy. This presupposes a preventative regulatory strategy in light of the prospective environmental danger.

Regulatory intervention in the form of the preventative strategy saw a temporary moratorium on the Preese Hall Site in 2011 after seismic events. Brownsword’s and Goodwin’s ‘moral register’ is at play here. Ethical reasoning shapes the strategy of regulators; a temporary moratorium was the right thing to do. The extent to which regulatory strategy will reduce risk to an acceptable level is by ‘calculating the offsetting benefit’. Arguably acceptability of risk has been achieved in this particular example. The ‘benefit’ is gained in relation to the protection of the environment and the public.

Returning to ‘policy-based evidence’, the government should assess whether fracking regulation is adequate in mitigating risk to an acceptable level. Policy-based evidence deems that ‘science has the function to underline existing commitments. This assumes a precautionary approach in relation to scientific uncertainty. This approach is reflected through the conduct of regulators in their implementation of monitoring systems for groundwater.

However, these methane surveys are spurious in nature when one considers that their application is sporadic occurring in only a few areas and the fact that they do not measure deep groundwater where there is a real risk of methane (baselines mainly test shallow water).

The implementation of the precautionary approach in relation to methane surveys lacks comprehensive enforcement amongst regulators and will virtually be ineffective in its application as a result of the failure to safeguard against risks of methane in deep groundwater. There is a lack of ‘offsetting benefit’ in the implementation process and thus an unacceptable level of risk; the regulation in relation to risk management of methane is inadequate.

The UK government must learn from past errors and monitor environmental harms to ensure that risk does not exceed the acceptable level.

Regulatory legitimacy according to Brownsword and Goodwin is the second tool used that will be used to test the adequacy of the regulatory environment. Procedural legitimacy is founded on an understanding of the democratic principles of good governance.

Thus, procedural legitimacy is shaped by public participation, transparency, and accountability, all of which are encapsulated within the Aarhus Convention. The extent to which the voice of the public is enforced and enacted within the decision-making process will determine whether the regulation is effective and thus adequate. ‘Effectiveness’ is achieved in this context when public participation influences the ‘problem-solving capacity of decision makers. This in turn improves the effectiveness of environmental solutions’.

Overall, the adequacy of the regulatory environment in which fracking is situated has been tested against both regulatory risk-management and regulatory legitimacy. Yet, adequacy needs to be tested in the context of a full regulatory cycle, ‘law on the books does not always translate to the law in action’. Successful implementation of the regulatory position is crucial if fracking is to be adequately regulated. 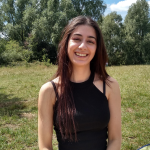 I am a Legal Practice Course & Master of Laws graduate from the University of Law. I think it is very important to promote core values and bring to the fore an understanding and awareness of fundamental topics in order to cultivate conversation.

The Effect of Women Response: Our Bodies, ...